C (39) is a sound designer. She spends many hours alone, recording foley effects, editing, mixing. The studio is her last refuge: a place where she can avoid dealing with her broken relationships with an ex-partner, an elderly mother and a co-worker.

C is starting to be out-of-sync. Like a badly synched film, her brain has begun to process sound later than images. As the delay increases, C is forced to quit her job, to deal with her mother’s death and to rethink her life completely.

Over time, she will discover that her disability is not just a stigma. It will allow her to make a living in a surprising way, and it will open the door to the world of the deaf. There she will meet Max (45) her sign language teacher, with whom she will have an intense relationship, unthinkable before the onset of her delay.

Suddenly she’s cured, but she’s not the same anymore. Her sensory odyssey has made her mature. And now she has a second chance. It’s up to her not to let it escape. 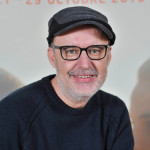 Juanjo Giménez was born in Barcelona. His last short film,TIMECODE (2016) won the Palm d’Or at Cannes, The 2017 EFA award for European Short Film, and was nominated for the Oscar for Best Short Film, as well as the Goya in in the same category. In all, it has won more than 100 awards at film festivals the world over. Giménez has also directed the feature film NOS HACEMOS FALTA (TILT 2003), which premiered at the Rotterdam Film Festival, and two documentaries, CONTACT PROOF (2014) and ESQUIVAR Y PEGAR (2010).

He has directed several short films which have won several national and international awards.